HomeMusicGET ON BOARD THE SOUL TRAIN: THE SOUND OF PHILADELPHIA INTERNATIONAL RECORDS VOLUME 1 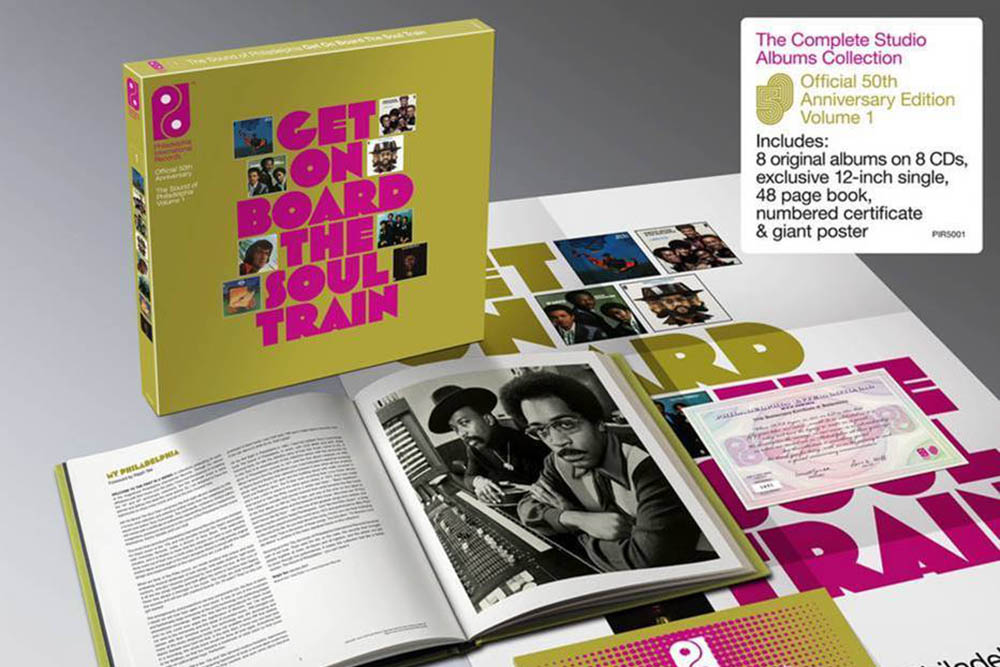 GET ON BOARD THE SOUL TRAIN: THE SOUND OF PHILADELPHIA INTERNATIONAL RECORDS VOLUME 1 GET ON BOARD THE SOUL TRAIN: THE SOUND OF PHILADELPHIA INTERNATIONAL RECORDS VOLUME 1
VARIOUS ARTISTS
United Souls / Sony Legacy

Back in the mid-’60s, the Philly Sound was a well-known and recognizable musical genre. Thanks to DJs and promoters like the great Jerry Blavat, Hy Lit, Frank X Feller, and vocal groups such as the Magnificent Men, the Delfonics, and the Soul Survivors, Philly music enjoyed a celebrated reputation among other artists and fans. It was considered rougher than the popular Motown label of the period, but not as bluesy as the Southern soul coming out of Muscle Shoals or Memphis. The Philly Soul sound was smooth without being shallow. The singers put their hearts on their sleeves and largely expressed their emotions by raising the pitch and breaking into falsetto rather than increasing the volume or intensity of expression. Its influence can still be heard in the songs of East Coasters like Bruce Springsteen and Low Cut Connie.

Kenneth Gamble, Leon Huff, and Thom Bell founded Philadelphia International Records (PIR) in 1971. They codified the Philly Sound through a string of internationally successful records that added orchestral strings and horns plus a dynamic beat to the existing formula. In conjunction with Sony Legacy Recordings, United Souls celebrates the 50th-anniversary of PIR with Get on Board the Soul Train: The Sound of Philadelphia International Records Volume 1. It’s a limited edition box set containing the first eight studio albums released by the label from 1971-1973 on remastered CDs, plus a bonus 12-inch single. They are housed in a sleek 48-page slip-cased hardcover book, with photographs, liner notes by Tony Cummings (Author of The Sound of Philadelphia), and a foreword by Ralph Tee. The rest of the PIR albums will are scheduled for a future release.

Some critics have argued that PIR watered down the original Philly Sound through their lush production techniques. Indeed, detractors have claimed the popularity of PIR’s polished style of R&B was responsible for the rise of generic disco later in the decade. There’s a thin line between professionalism and being too slick, and some of PIR’s biggest hits such as “When Will I See You Again” (The Three Degrees) and “You’ll Never Find Another Love Like Mine” (Lou Rawls) fall on the light and cheesy side of R&B. However, PIR was a big operation that featured many different styles. The label received over 150 gold and platinum record awards during its first ten years. PIR released commercially successful albums in a variety of styles while still retaining the label identity.

The first eight albums collected here include three by Billy Paul (Going East, 360 Degrees of Billy Paul, Ebony Woman), and one each by Harold Melvin & the Blue Notes (I Miss You), the O’Jays (Back Stabbers), Dick Jensen (Dick Jensen), the Intruders (Save the Children), and MFSB (MFSB). None of these records are perfect, although the O’Jays’ Back Stabbers comes close, and they all have their charms and moments of greatness.

The O’Jays had been recording since the 1950s with varying success. When signed to PIR, they were a trio and here they cover a batch of songs by Kenny Gamble and Leon Huff, including the gospel-tinged “Love Train”, the infectious dance number “Time to Get Down”, and the sneering title track. While the album has some filler, the vocalists keep the music flowing, and the production remains fresh throughout. This album took the band into a higher realm of stardom than they had been before.

The three Billy Paul albums showcase the singer’s vocal dexterity and catholic tastes. He’s a cabaret singer on Going East, doing a jazzy, upbeat version of Steppenwolf’s “Magic Carpet Ride” on one track and then crooning a melodramatic take on the Rodgers and Hart chestnut “There’s a Small Hotel”. The album 360 Degrees of Billy Paul captures the dulcet-toned singer at his soulful best. It includes his monster hit, the ode to infidelity “Me and Mrs. Jones”, the inspirational statement of pride, “Am I Black Enough for You”, and other topical material. For the third album, Paul covered a slew of pop hits, including Simon and Garfunkel’s “Mrs. Robinson”, the Association’s “Windy”, and Creedence Clearwater Revival’s “Proud Mary” and gives them each a hip, if somewhat facile, jazz treatment.

Harold Melvin & the Blue Notes’ I Miss You marked the first time the great singer Teddy Pendergrass recorded with the band. His take on “If You Don’t Know Me By Now” and the title song, “I Miss You” are tours de force. They still stand out as masterpieces. Pendergrass sensually wraps his baritone voice around the lyrics and sings his heart out. The rest of the record pales in comparison to these stellar songs despite elaborate production.

The Intruders’ Save the Children features the heartwarming “I’ll Always Love My Mama” and contains lots of free riffing plus other soft rock selections, including a cover of Paul Simon’s “Mother and Child Reunion”. These are the album’s best moments. MFSB started as PIR’s house band. Their name stood for Mother Father Sister Brother. The group was known for having a tight sound, which is clearly in evidence on these recordings. Dick Jensen was well-known as an energetic entertainer when he signed with PIR. He had performed in Las Vegas and opened for internationally famous acts like the Rolling Stones. Jensen does exude charisma, but the album lacks a killer single, and the material tends to blend in an undistinguished way. His winsome personality doesn’t seem to fit the production.

A 12-inch-vinyl containing exclusive versions of “Back Stabbers” by the O’Jays and MFSB accompanies the eight CDs for some reason. They are fine cuts but seem superfluous because of their format. Wouldn’t it be easier just to put some bonus cuts on the compact discs instead of putting the songs on vinyl? Taken as a whole, the box set handsomely presents remastered versions of classic music from 50 years ago. While not every cut is a winner, there are plenty of fine performances to be found. This is sophisticated and smooth Philly Soul from the genre’s most successful period.

By admin
Prev Next
Back to top