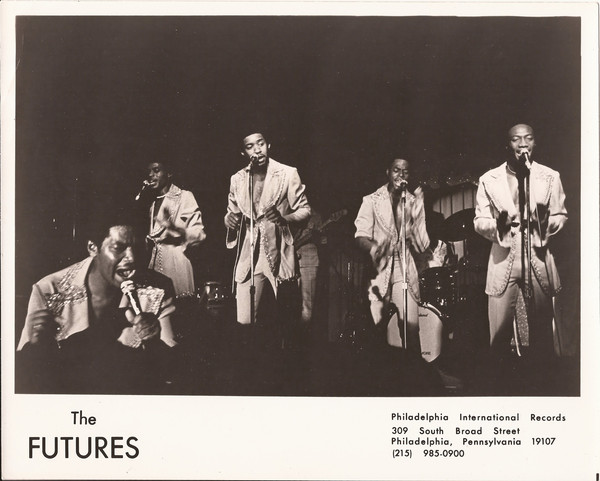 One of Philadelphia's finest groups, the Futures made good music, but Lady Luck refused to work her magic on them. Frank Washington, Kenny Crew, James King, John King, and Henry McGilberry emulated the Temptations. Amjo Records released their first single in 1970, "Breaking Up" b/w "Our Thing." Richard Wright (deceased) sang lead on the Amjo side along with other members that, with one or two exceptions, differed from the previously mentioned names. Avalanche Records reissued the Amjo single the following year. The next single, "Love Is Here," appeared on Kenny Gamble and Leon Huff's Gamble label. It was a lovely Gamble and Huff song featuring a searing falsetto, McGilberry's deep bass, and weaving harmonies that only got spot play in a few cities; the Dramatics recorded an inferior version on their 10 1/2 album. The Futures made a terrible career move when Gamble Records ended by signing with Buddah Records and missing a golden opportunity with Philadelphia International Records. Their first Buddah release, "(That's) The Way of a Woman in Love" b/w "Grade A Woman," dropped in January 1974 to a deafening silence. The second single, "No One Could Compare" b/w "You Better Be Careful," also failed to register. As they wallowed in obscurity, the O'Jays and Harold Melvin & the Bluenotes bloomed on Philadelphia International and the Spinners and the Stylistics reaped the benefits of their productions. Castles in the SkyBuddah released the Futures' third single, "Castles," June 1975, which continued the string of flops. They issued the Futures' first album, Castles in the Sky, in 1975, which didn't include the first two singles and its promotion was almost nonexistent. Barbara Mason wrote their final Buddah single, "We Got Love," prompting a poorly promoted tour with Philly's First Lady of Soul. They reunited with Gamble and Huff in 1978 at Philadelphia International Records, but the company's glory days were over. The first release, "Part Time Party Time Man," an energetic dancer with a terrific vocal, never charted high, yet was their most successful single. Its delightful successor, "Ain't No Time for Nothing," was succeeded by three more singles, including "Mr. Bojangles." Philadelphia International released two albums by the Futures: Past Present & the Futures and the obscure Greetings of Peace.