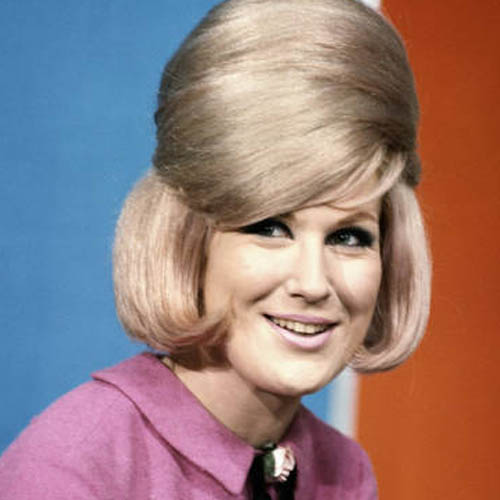 Britain’s greatest pop diva, Dusty Springfield was also the finest white soul singer of her era, a performer of remarkable emotional resonance whose body of work spans the decades and their attendant musical transformations with a consistency and purity unmatched by any of her contemporaries; though a camp icon of glamorous excess in her towering beehive hairdo and panda-eye black mascara, the sultry intimacy and heartbreaking urgency of Springfield’s voice transcended image and fashion, embracing everything from lushly orchestrated pop to gritty R&B to disco with unparalleled sophistication and depth. She was born Mary O’Brien on April 16, 1939, and raised on an eclectic diet of classical music and jazz, coming to worship Peggy Lee; after completing her schooling she joined the Lana Sisters, a pop vocal trio which issued a few singles on Fontana before dissolving. In 1960, upon teaming with her brother Dion O’ Brien and his friend Tim Feild in the folk trio the Springfields, O’Brien adopted the stage name Dusty Springfield; thanks to a series of hits including “Breakaway,” “Bambino,” and “Say I Won’t Be There,” the group was soon the U.K.’s best-selling act. After the Springfields cracked the U.S. Top 20 in 1962 with “Silver Threads and Golden Needles,” the group traveled stateside to record in Nashville, where exposure to the emerging American girl-group and Motown sounds impacted Dusty so profoundly that in 1963 she left the Springfields at the peak of their fame to pursue a solo career. Her first single, “I Only Want to Be With You,” boasted a dramatic sound and soulful melody worthy of a Phil Spector hit, and it quickly reached the British Top Five; it also fell just shy of the Top Ten in the U.S., where it became the first major record from a U.K. act other than the Beatles since the Fab Four’s launch of the British Invasion. Her biggest American Top Ten hit, “Wishin’ and Hopin’,” was the first in a series of Springfield smashes from the pen of songwriters Burt Bacharach and Hal David; she would subsequently cover Bacharach/David classics including “Anyone Who Had a Heart” and “I Just Don’t Know What to Do With Myself,” surpassed only by Dionne Warwick as the finest interpreter of the duo’s songs.