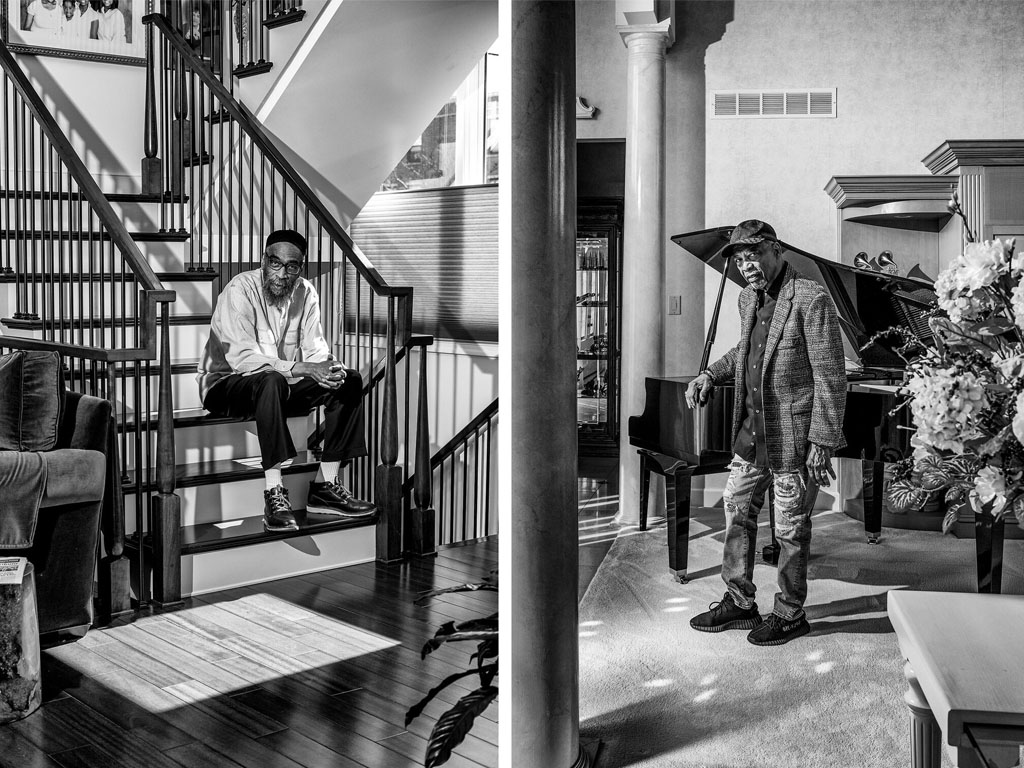 By Alan Light
Feb. 25, 2021
Updated 10:52 a.m. ET
By the late 1970s, things had gotten so busy at Philadelphia International Records that the label’s co-founders, Kenny Gamble and Leon Huff, had to leave town to write new songs. During one trip to Jamaica, they were settling in at the piano when a power outage hit the island.

“It was scary for a second, but then we said, ‘Turn off the lights,’” Huff recalled in a recent interview. “Gamble got a candle so we could see, so that was the second line: ‘Light a candle.’” Sitting in the dark, they soon sketched out “Turn Off the Lights,” which became a No. 2 R&B hit for the powerhouse sex symbol Teddy Pendergrass.

“We were just in a creative zone,” Huff explained, still sounding both amused and a little bit awed.

It was a zone they inhabited for a long time. During the ’70s, 40 songs written by Gamble and Huff reached the R&B Top 10, including 14 No. 1s. A dozen of those songs crossed over to the pop Top 10, including classics like Billy Paul’s “Me and Mrs. Jones,” “Love Train” by the O’Jays, and “TSOP (The Sound of Philadelphia)” — better known as the “Soul Train” theme — credited to the label’s house band, MFSB.

This year marks the 50th anniversary of Philadelphia International, which is being celebrated with a series of reissues, remixes and a channel on Sonos Radio HD. Mostly, though, the milestone provides a chance to reflect on the contributions and legacy of a musical dynasty that not only established its own signature style of symphonic soul but expanded the scope of social commentary in Black pop music, with songs like Paul’s “Am I Black Enough for You?” or the O’Jays’ “Ship Ahoy,” a chilling account of the African slave trade.

“We were able to capture the ears of that generation,” Gamble said. “We had a line in the song ‘Message in Our Music’ — ‘understand while you dance.’ You can be dancing, but are you listening to what these people are saying? There’s a group of people who will listen if it’s got that beat to it.”

Alongside its bold, conscious lyrics, the Philadelphia International team also provided a pioneering example of a Black-owned company that retained strong connections to its community. Multiple generations of Black artists and executives have been inspired and mentored by Gamble and Huff. And the songs still resonate with today’s activists: The O’Jays recorded a new version of “Love Train” for the 2020 Democratic Convention, and on Election Day, observers gathered outside Philadelphia’s convention center encouraged the vote tabulations by singing “Ain’t no stopping the count” to the tune of McFadden and Whitehead’s 1979 hit “Ain’t No Stoppin’ Us Now.”

Troy Carter, founder of the artist services company Q&A, said in a telephone interview that he recalled meeting Gamble in their native Philadelphia when Carter was a 17-year-old aspiring rapper. “I asked him to give me some advice and he said, ‘Every dollar you make from music, put it into real estate,’” said Carter, whose previous positions include managing Lady Gaga and serving as Spotify’s global head of creator services. “I was looking for advice in my music career, and he was already training me to be a businessman.”

In separate telephone conversations from their homes, both members of the duo — who were inducted into the Rock & Roll Hall of Fame in 2008 — said they’re still writing songs during the pandemic. “I’m just reviewing things a little bit,” said Gamble, who still lives in South Philadelphia, “because the world is a whole lot different now, and I want to see where it’s going.”

Huff, 78, resides in south New Jersey; he grew up in Camden, playing piano and drums. After finishing high school, he started booking sessions in New York, and played on such hits as “Baby I Love You” by the Ronettes and “The Boy From New York City” by the Ad-Libs. At 21, he wrote “Mixed-Up, Shook-Up Girl” for Patty & the Emblems, which reached the Top 20.

Gamble, 78, led a popular local band in his hometown called Kenny Gamble and the Romeos. The young musicians met in the elevator of the Shubert Building, where they were both writing songs for local music-production companies. “Gamble came over to my house in the projects,” Huff said, “and the first time we sat down, we wrote six or seven songs.”

When the two songwriters decided to form a production company of their own, they traveled to Detroit and visited the home of their greatest inspiration, Motown Records.

“That was my first airplane ride,” Gamble said. He explained that Eddie Holland, of the producing/songwriting team Holland-Dozier-Holland, showed the duo how Motown worked, from the studios to the contracts. “Me and Huff were very excited — that was a dream, to be able to see Motown,” Gamble said. “On the way back, we discussed it and said that rather than have to go all the way to Detroit to fulfill our dreams, we would stay in Philly and create something similar to Motown. And that’s exactly what we did.”

With money borrowed from a friend in the clothing business, the partners set up shop in the mid-60s, and by 1967, they had a Top 5 hit with “Expressway to Your Heart” by the Soul Survivors. Gamble and Huff made a few attempts at starting their own record company, but in 1971, Clive Davis — concerned that CBS Records was lagging in the Black music market — offered them a distribution deal, and Philadelphia International Records was born.

“Philadelphia International really took the reins from Motown,” said the Grammy-winning producer and songwriter Jimmy Jam in a telephone conversation, explaining that the label provided the “blueprint” for the work he has done with his partner, Terry Lewis. “I didn’t understand joint ventures and all that stuff, I just knew that at the bottom of that green label it said ‘Distributed by CBS Records’ — and that was Columbia and Epic. So here’s a company run by Black people that’s on the same level as those labels, and I remember thinking how cool that was. And you knew when you saw that green label that it was going to be something great.”

Carter noted the connection between Philadelphia International’s corporate and creative sides. “Looking at what they did in terms of entrepreneurship, they owned the recording studio, the label, the masters, they had a publishing company,” he said. “It’s one thing to want to become an artist or an athlete, but they showed us that you can actually start and build some serious businesses. And the music was about Black unity — messages of positive reinforcement that just happened to have the sweetest melodies and great lyrics.”

As the hits started pouring out of Sigma Sound Studios, the label’s primary recording base, the company was becoming synonymous with a sound known as “Philly Soul.” The core musicians from the Romeos were augmented with horn and string players — in the early years, under the direction of the arranger Thom Bell — named the MFSB Orchestra (the letters stood for “Mother Father Sister Brother”), to create a lush, swirling sound over the driving, gospel-inflected rhythms. It’s been said that Philadelphia International “put a bow tie on the funk.”

“The string players came from the Academy of Music,” Huff said. “They were all accomplished musicians, playing classical music, and then they’d come over to our studio and get funky, and they loved it.”

Eddie Levert of the O’Jays — whose 1972 album “Back Stabbers” is often considered the pinnacle of the Philly Sound — said PI.R. “was almost like a workshop,” in a telephone interview. “They were able to take people who had the talent, and then rehearse those songs until they became a part of you, and really lived in you.”

As the label and its roster grew, so did the subject matter of the songs. Where Motown had resisted political messages in its lyrics (Berry Gordy Jr. fought hard to convince Marvin Gaye not to release “What’s Going On”), at P.I.R. they came to the foreground: “The Love I Lost” and “When Will I See You Again” gave way to “For the Love of Money” and “Wake Up Everybody.”

“That was the atmosphere in the world at that time,” Huff said. “We were always aware of what was going on in the community and with the people around us, so we wrote about real life — just expressed ourselves through music.”

Levert pointed out the continuing relevance of their recordings. “Those songs stand the test of time,” he explained. “When we did them, we were talking about that period we were living in, what was going on at that time. But they’re still relevant, because nothing has changed — the same message can still apply to us and our way of life today.”

Philly Soul laid out a road map for disco, and the songs have been consistently covered and sampled in the hip-hop era. The label continued to release important records in the ’80s, most notably “If Only You Knew,” Patti LaBelle’s first solo single to reach No. 1 on the R&B chart, and first to cross over to pop success.

But as the hits slowed down, Gamble and Huff increasingly turned their attention to activism. In 1977, they put together an all-star benefit project called “Let’s Clean Up the Ghetto,” and Gamble got involved in real estate, building and renovating homes in South Philadelphia and backing local businesses and charter schools. (“He went into the worst neighborhoods,” Carter said. “Talk about putting your money where your mouth is.”)

Jimmy Jam said that the duo modeled an approach to having a second or third act, “where you’ve already been successful, but you take that platform and the money you made and the lessons you’ve learned and you put that into making your community thrive.”

After 50 years of Philadelphia International Records, it’s that achievement — spreading a message of empowerment and then backing it up with action — that Gamble and Huff point to as their true source of pride. “We’ve done a lot to contribute to the future and try to help our people,” said Gamble. “The music was the bottom line to the whole thing, but what did that music represent?

“When you think of our music, it was 360 degrees of knowledge that we gave,” he continued. “A lot of great love songs, which is important in life, but also a lot of songs about building our community, building people. It don’t mean anything if you don’t leave something for the next generation.”